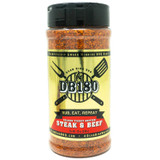 Dead Bird BBQ, DB180 Rubs and Seasonings owner Will Collier returned home from service in the military and began researching the world of competitive BBQ. His first Kansas City BBQ Society (KCBS) sanctioned competition was the experience that triggered his passion for competitive BBQ. Will started his journey by entering local contests with borrowed smokers, and success at the backyard level. At one of his first competitions with his new competition smoker, he opened his new pit and found a dead bird inside! The bird flew the smokestack and from that point on, his team was known as Dead Bird BBQ and Dead Bird BBQ cooked the very first competition as a team in October of 2016.

DB180 Rubs were born in 2017, and Dead Bird BBQ began their first season competing professionally and working diligently on developing recipes for his own rubs to use at KCBS competitions. Will began using Dead Bird BBQ rubs in the 2018 season and his meats began receiving a perfect score of 180 at 3 different competitions! Will shared samples of his rubs with another team that team received their first ever 1st place pork call, and finished as Reserve Grand Champions at the contest.

The positive results brought fitting name of the rub line to DB180 (Dead Bird + 180 = perfect score in BBQ) and the DB180 line of BBQ rubs became commercially available. Dead Bird BBQ is one of the most successful new teams in the nation, and using the entire line of DB180 rubs, Dead Bird BBQ finished ranked 2nd in the State of Oklahoma and 3rd Overall in the nation. In 2019 Dead Bird BBQ started using DB180 rubs at Steak Cookoff Association (SCA) and using a combination of DB180 Steak & Beef and DB180 All Purpose, Will secured two Golden Tickets to the SCA World Championship (2019 & 2020). Whether for catering, tailgating, grilling in the backyard, competing locally, or in professional competitions, DB180 Premium Rubs are a game changer!